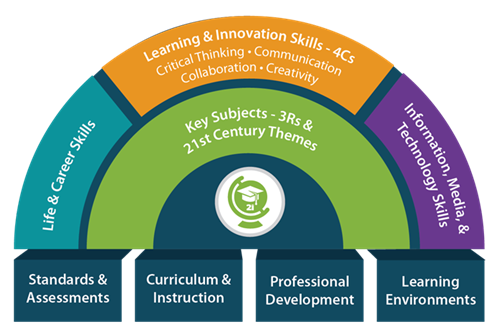 The term “21st century skills” is a buzzword frequently found in contemporary education curricula, and for good reason: it refers to a diverse array of skills, competencies, knowledge, and character traits that are widely believed by academics and employers to be necessary for success in current times. In the 21st century learning framework above, 21st century skills comprise the outer ring of the semicircle.

You might be thinking “what makes 21st century skills so special that they have been given a special name?”. Well, the 21st century presents unique challenges that had not existed in previous centuries. The emergence of new types of obstacles results from the changing state of the world, with increasing globalization, technological advancement, and climate change. Naturally, new capabilities are required to address these issues.

In response to the novel challenges presented by the 21st century, the Partnership For 21st Century Skills (P21) was formed by private corporations and US government entities. It is a non-profit organization dedicated to embedding 21st century skills in the US education system. Despite the formal focus on the US, the movement has inspired educators around the world to include 21st century skills in education. The Global Citizen (TGC) Education Group is dedicated to helping pupils develop these skills so they can fulfill their roles as global citizens.

Critical thinking is defined as the ability to analyze the facts in a particular circumstance, and subsequently come up with solutions to challenges. To think critically is to exercise an analytical mindset, which involves asking the right questions and verifying the accuracy of information. This kind of skepticism is especially apt for the 21st century, where there is an abundance of data and information with potentially questionable accuracy. Eventually, based on analysis, critical thinkers proceed to formulating an effective solution to the problem at hand. To do this, creative thinking is needed.

Creative thinking can be defined as the ability to think laterally. Simply put, being able to think creatively means possessing the ability to switch perspectives and see a problem from different angles to come up with innovative solutions. Fostering creativity develops resilience, as being able to innovate means being able to adapt as times change, which is especially pertinent to the 21st century, where change is the only constant thanks to rapid technological advancement. Creative thinking really is a skill that pays dividends.

Are you familiar with the sayings “two is better than one” and “the more, the merrier”? Well, collaboration embodies those adages. To collaborate is to work with other people in pursuit of a common goal, which often requires making compromises for the greater good. In today’s world, collaboration is essential, particularly when it comes to global issues, such as climate change, when the collective effort of all countries are needed. The skills required for effective collaboration include communication, social and leadership skills.

Great ideas resulting from critical and creative thinking are wasted when they are poorly, or worse, not communicated. Furthermore, communication is essential for collaboration. Without clear objectives and targets, collaboration will be done in vain and conflict will likely result. Communication consists of two fundamental components: sending a message, whether orally or in written form, and listening. Unfortunately, listening is often overlooked and people tend to just wait for their conversation partners to finish speaking before their turn. However, listening is key to understanding the other side’s needs, values, and concerns, which is necessary for effective collaboration.

Information literacy is defined as the ability to understand and produce information, which may be in the form of facts, figures, statistics, and data. To understand information is to accurately comprehend its meaning and implications, which may be wide in scope. To produce information is to utilize the communication skills discussed in the previous section to convey new knowledge, be it orally, in writing or in diagrams. Information literacy is the cornerstone of all other skills, as it allows an individual to learn about the world around him/her. The 21st century is often known as the Information Age, so the ability to see beyond the deluge of misinformation is important.

Media literacy is defined as a familiarity with the various channels and media through which information is produced and disseminated. Again, communication skills come into play here, where individuals must recognize the sender, the recipient, the purpose, and the context of the message. Knowledge of these four elements will enable individuals to make astute judgments of the information’s significance. In the 21st century, media bias is rife, so having media literacy in your toolbox is your best bet at avoiding misinformation and making informed decisions.

Technology literacy is defined as an understanding of the tools and software that exist in the world today. As technology grows an ever more dominating presence in 21st century life, individuals need to understand its purpose, workings and implications, to prevent abuse/misuse and to use them for solving problems effectively. Furthermore, technology literacy could foster innovation and growth.

Flexibility is defined as the ability to adapt and change plans as required by the circumstances. This quality is absolutely essential for resilience in the 21st century, which has been defined by volatility and uncertainty. For example, the COVID-19 pandemic took the world by storm in 2020, disrupting virtually all aspects of life, from work to travel. To be flexible, individuals need to be humble enough to accept that they do not know and are not in control of everything that happens. Subsequently, individuals need to plan for the worst and always be open to change.

Leadership refers to the ability to set goals, and facilitating collaboration and inspiring others to achieve said goals. Children should develop leadership skills starting from a young age, as they will be the leaders of corporations and countries in the future. They need to learn how to motivate others and resolve conflict among team members. The best leaders know how to communicate with their audience, and are flexible. Leadership is essential for mobilizing a large group of people towards a common goal, such the United Nations’ Sustainable Development Goals.

A person with initiative may be known as a self-starter and self-director. Without being asked or commanded, he/she is willing to set goals for him/herself and work towards realizing an idea. Taking initiative means taking risks, and learning to deal with setbacks and failure. It involves creating a plan of action, and staying committed to the goal. Leadership and initiative often go hand in hand.

Productivity is the ability to stay focused and efficient amidst distractions. Being productive means staying on task, and reaching goals in a prompt fashion. The 21st century is filled with distractions; from the news to social media, our attention reserves are being depleted at warp speed. To stay productive, individuals need to learn to set goals, plan, and manage their time.

Finally, social skills refer to the ability to form relationships with other human beings. Connecting with fellow humans requires an open mind, a listening ear, and empathy. Communication skills are definitely needed in relationships, as well as the ability to trust others. In the 21st century, where communication not only takes place in real life but also online, social skills do not lose their importance. If anything, they have become even more indispensable as online communication is prone to misunderstanding, which could lead to conflict.